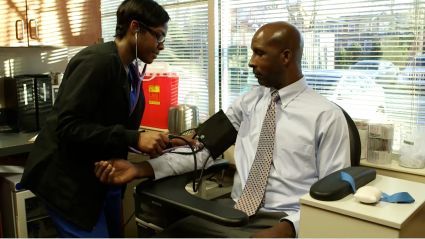 FRIDAY, Nov. 4, 2022 (HealthDay News) — A new study has shown the blood pressure drug telmisartan may offer new hope as an Alzheimer’s treatment in Black patients. It did not show the same benefit in white people.

Learning how people from different ethnic groups respond to the same drug could be key in the fight against Alzheimer’s disease, researchers say. Even though Black people are more likely than white folks to develop the disease, they are underrepresented in clinical trials.

Cheng said future trials should make it a priority to include patients from minority groups.

The drug examined in this study — telmisartan — is prescribed for people with high blood pressure. The study found it is associated with a lower risk of Alzheimer’s in Black patients over age 60 but not in white patients.

The researchers said this indicates angiotensin II blockers might be helpful in preventing or treating Alzheimer’s in Black patients.

In this study, researchers examined data from more than 5 million patients in the Alzheimer’s Disease Sequencing Project, a nationwide effort to identify genetic underpinnings of the disease, as well as effective drug targets.

Cheng’s team is working to find new targets and medicines that can be repurposed for use in Alzheimer’s disease treatment.

Alzheimer’s affects more than 6 million people in the United States. While Black people over age 60 are up to twice as likely to develop Alzheimer’s than white people, only one drug is approved to treat potential underlying causes directly in the brain.

Black patients are more likely to have the other health conditions associated with Alzheimer’s, such as high blood pressure, diabetes and chronic kidney diseases. Researchers are working to determine how managing these conditions might also reduce Alzheimer’s risk.

The findings were published Nov. 4 in Alzheimer’s & Dementia: The Journal of the Alzheimer’s Association.

The U.S. Centers for Disease Control and Prevention has more on Alzheimer’s disease.