Skip to content
WeeklyMD > Blog > Health & Technology > Robotics Can Give People 3rd Thumb, But How Will Brain React?

Robotics Can Give People 3rd Thumb, But How Will Brain React? 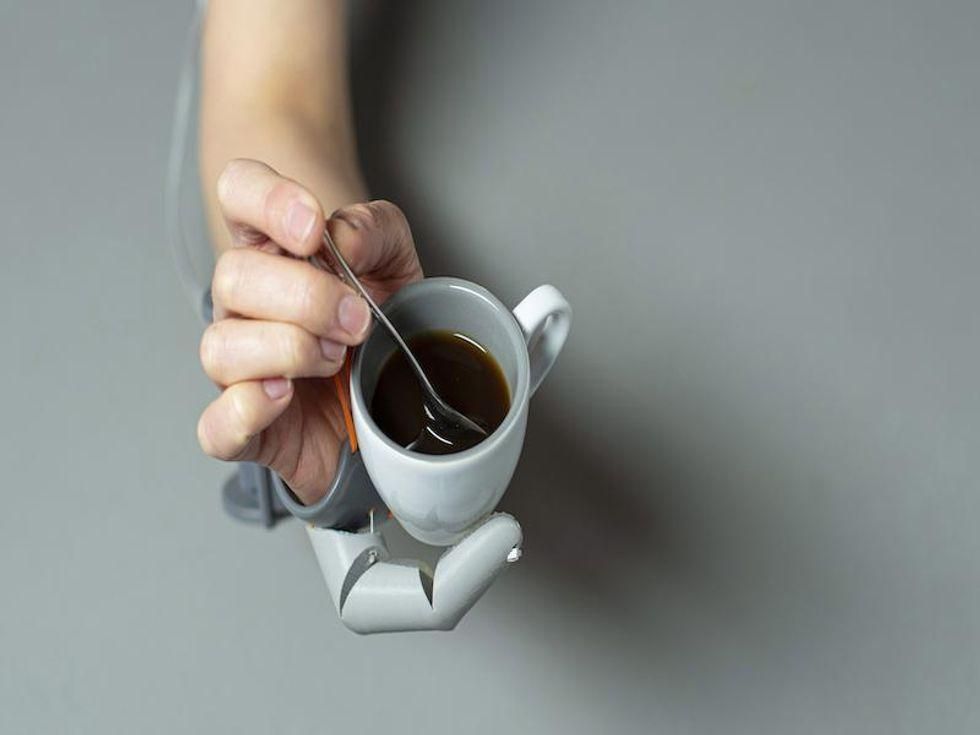 THURSDAY, May 20, 2021 (HealthDay News) — If you’ve ever wished you had an extra hand to accomplish a task, never fear, scientists are working on that. But a new study raises questions about how such technology could affect your brain.

The findings come from ongoing research into a 3D-printed robotic thumb known as “Third Thumb.” It’s worn on a person’s dominant hand, making it capable of feats that normally demand both hands.

British researchers found that volunteers learned how to use the extra digit quickly — lifting, carrying, sorting and stacking multiple objects with their single enhanced hand.

But there was a possible red flag: MRI scans showed that after just a few days, participants’ brains had reorganized the natural hand’s “representation” in a movement-related region. It had, in basic terms, shrunk.

It’s not clear yet whether that change is good or bad, temporary or not, according to the researchers, from University College London (UCL).

But they said it should give the burgeoning field of “motor augmentation” something to consider going forward.

Motor augmentation refers to robotic devices that can act as extra fingers or even a whole arm, with the aim of expanding the normal human movement capacity.

Here’s how the technology works:

It might sound like science fiction. But extra digits could come in handy in a range of jobs, according to researcher Dani Clode, the designer of the Third Thumb.

As an example, she cited factory workers or engineers who routinely perform repetitive but physically demand tasks.

“An extra pair of hands or digits could assist them in difficult assembly situations, allowing them to do their job in a more safe and efficient way, and perhaps without assistance from others,” Clode said.

Tamar Makin, a professor of cognitive neuroscience at UCL, said robotic appendages could be used in everything from high-precision scenarios — like surgery — to mundane chores.

“There are so many things we could do if we had hand extension,” Makin said. “We could chop vegetables while stirring a broth, or sip our coffee while typing. The opportunities are endless, but because this is such a novel concept — and because our world has been designed to accommodate our five-fingered two hands — people might struggle to imagine what it could be used for.”

While many possibilities can be imagined, the researchers also had a caution: No one knows, exactly, how the brain will respond to these robotic add-ons.

And these latest findings, published May 19 in the journal Science Robotics, raise questions.

Makin, Clode and their colleagues had 36 able-bodied volunteers learn to use the Third Thumb, performing tasks in the lab and “in the wild” of real life.

The device is worn on the pinkie side of the hand, attached by straps that wrap around the wrist and palm. The wearer operates it by manipulating sensors strapped under each big toe.

Despite that complicated-sounding toe-robot coordination, the study participants became adept at using the thumb over just five days, the researchers said.

But MRI scans of the volunteers’ brains revealed a consequence: The natural hand’s representation in the brain had “shrunk.”

The big unknown is, what does that mean?

Since the extra thumb forced people to alter the way they moved their hand, Makin said, some change in the brain is expected.

“What surprised us is how quickly this happened,” she said. “After five days of practice to use the thumb, their own hand representation — which they’ve been developing over the course of their entire life — has changed.”

The researchers found no clear evidence participants lost any ability to use their natural fingers. But that is something they will monitor going forward.

Dr. Eran Klein is a neurologist and affiliate assistant professor at the University of Washington, who studies the intersection of neurology and philosophy.

He said he was unsure how much weight to give the new study’s findings. “The brain changes all the time in response to learning skills,” Klein noted.

Still, he believes the study raises interesting questions. Broadly, Klein said, there’s the matter of “what is lost” when humans outsource skills to devices.

When we rely on GPS, for instance, what is the consequence for our own navigation prowess?

With robotic appendages, Klein said, one issue is whether they’re inherently different from any other tool people use — like a screwdriver.

Probably, he noted, since the devices are worn on the body and resemble human digits or limbs. So what happens when the brain integrates them into the body “schema” — the felt sense of the body?

That’s not a wholly new concept. People who use a cane, for instance, can start to feel it’s part of them, Klein pointed out.

“I think what’s interesting about this study,” he said, “is that it brings up the bigger question of, what are we going to allow as things that become ‘part of us’?”

BrainFacts.org has more on technology and the brain.