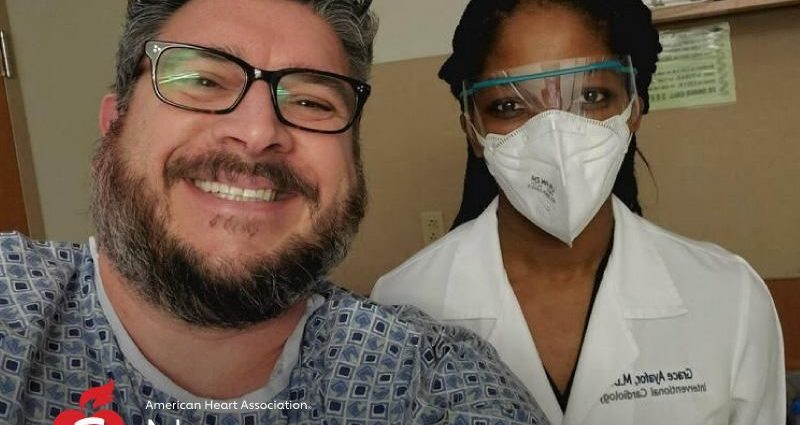 FRIDAY, Sept. 10, 2021 (American Heart Association News) — On a frigid morning this February, 44-year-old Renick Blosser set out on his typical Saturday routine. He grabbed a cup of coffee and took his dogs for a walk in the snow near his home in suburban Akron, Ohio.

By the time he returned, he knew something was wrong.

Suddenly, his chest tightened. He texted his wife, Megan, who was at work, that he didn’t feel well. Maybe it’s gas or anxiety, she suggested. Maybe take some medicine to help calm down.

“I don’t think this is an anxiety attack,” he replied. “This just feels weird.”

Renick knew he was out of shape and needed to shed some pounds. Still, he figured he was young and healthy enough that it couldn’t be too serious. He drank a glass of water, sat down and hoped the chest discomfort would pass.

Instead, the tightness went from something like a pulled muscle to feeling “like someone was hammering my chest with a crowbar.” Meanwhile, he felt cold but was sweating profusely. His arms went numb with waves of pins and needles. He began panting.

He texted his wife again. “Hey, I can’t breathe. I think I’m having a heart attack. This is bad.”

Still unconvinced, she tried to ease his mind. “You know, we’ve heard it multiple times, panic and anxiety attacks sometimes feel like a heart attack,” she texted back. “I felt the same way last week. … Maybe it’s COVID.”

As they debated about dialing 911, his pain blurred into confusion and his messages became unintelligible. He yelled for his two daughters. Normally, they would be away on Saturday mornings playing sports or visiting their grandmother.

His youngest daughter, 12-year-old Asa, bolted down the steps and saw her father was in trouble.

“It was kind of like weird and shocking,” she said. “I was so confused because I didn’t know what was going on because I just woke up and he was panting, shaking and asking for help.”

She dialed 911, carefully described her father’s symptoms and relayed the address, unlocked the door and waited. The dispatcher explained that he probably wasn’t having a heart attack.

While she waited, she helped her father get on the floor and spoke calming words to keep him awake.

Minutes later, when paramedics arrived, they also questioned whether he was experiencing a heart attack. Still in intense pain, he tried to convince them otherwise.

“This is a heart attack,” he recalled pleading with tears in his eyes. “Please, save me.”

Emergency room tests revealed he had a cardiac event. He was rushed into the catheterization lab, where doctors discovered a 100% blockage in his right descending coronary artery. An immediate coronary angioplasty to restore blood flow in his heart was necessary to save his life.

Renick wondered if he’d live to celebrate his daughter Zoey’s 16th birthday in a few weeks. He had spent weeks searching for the perfect gift for the shark-obsessed teen. He’d finally found a 6-inch prehistoric fossilized megalodon shark tooth.

Had 10 more minutes passed before he received emergency treatment, Renick likely would have died, doctors told him after surgery.

Thankful he didn’t ignore his symptoms or take a nap, the experience forced him to take a closer look at his lifestyle.

A marketing associate director for a biopharmaceutical company who traveled often, he admits he didn’t make the best choices or use moderation. Cheeseburgers, bourbon and cigars while on the road at night were common, and extremely long work hours usually replaced exercise. Following his life-threatening ordeal, he promised his cardiologist, Dr. Grace Ayafor, that he would eat healthier, exercise, sleep more and reduce his stress.

So far, he’s shed about 40 pounds, improved his blood pressure, cholesterol and heart rate. Renick also sold some expensive cigars and bottles of bourbon and used the money to build a home gym.

Instead of ordering pizza and other takeout, the Blossers have been eating more homecooked meals, salads, grilled chicken and vegetables. They’ve also cut back on their sodium. Friends in the Facebook cooking group the couple started in March 2020 to help people get through the pandemic have shared heart-healthy recipes.

In addition to buying new jeans and belts, Renick has had his business shirts tailored to fit his new physique.

“I’m stronger and don’t get winded while I’m running through the airport to catch flights,” he said. “I have so much more energy, and it feels great.”

His family is following his lead.

Asa loves candy, but she’s cut back on sweets. An athlete who plays basketball, lacrosse and tennis, she’s pleased her father is working out and shedding pounds.

Instinct and television shows such as “Grey’s Anatomy” and “The Good Doctor” helped her know what to do to help her dad.

She believes anyone can help a loved one having a suspected heart attack – even a kid.

2021-09-10
Previous Post: Getting Your First COVID Shot Can Boost Mental Health: Study
Next Post: Vaccinated Have 1 in 13,000 Chance of Breakthrough Case Needing Hospitalization