Skip to content
WeeklyMD > Blog > Heart / Cardiovascular > AHA News: A 3-year-old girl with Down syndrome is already a model and ambassador of the heart

AHA News: A 3-year-old girl with Down syndrome is already a model and ambassador of the heart 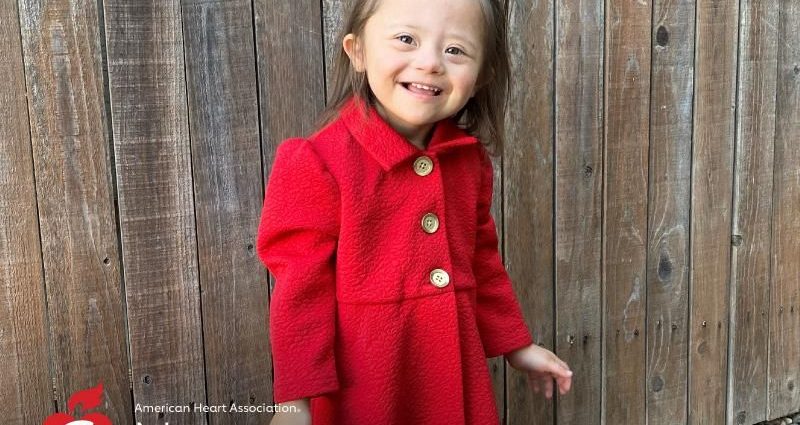 THURSDAY, Oct. 7, 2021 (American Heart Association News) — Heart surgery can be tough. It can be stressful. And while it can lead families on a path they might not have chosen, sometimes that path guides them smack dab into a purpose.

That’s what happened to Ariel Hernandez and her family.

When she was barely 2 years old, Ariel had a lifesaving operation. It was a groundbreaking procedure that her heart surgeons learned in Brazil, and news of it spread widely. A year later, Ariel has been part of television interviews with her cardiologist, Dr. James Hill, in Sacramento, California.

Even before surgery, Ariel, who also has Down syndrome, was modeling for major retailers, which she loves, said her mom, Kristal Hernandez. It’s a way “to tell her own story, and to put a face and personality on a diagnosis. We want children like her to see her and say, ‘That little girl looks like me!'” Kristal said.

Since the surgery, Ariel has been named a Go Red for Women ambassador for the American Heart Association in northern California. Kristal is working on a book about children undergoing heart surgery in hopes it can help young heart patients.

Ariel’s twin sister, Katalina, doesn’t have Down syndrome. Kristal and her husband, Matt Hernandez, didn’t find out Ariel’s diagnosis until the girls were born. That was followed by another revelation: Like many children with Down syndrome, Ariel also had heart issues. Her parents were told she might need surgery before she even left the hospital. Instead, she saw Hill every few months to monitor her status.

Last summer, Hill determined Ariel was old enough and big enough to have her heart repaired. The procedure involved closing two holes and repairing two valves. The typical procedure leaves a long scar from the base of the neck to the top of the abdomen. But Hill determined she was a good candidate for a new surgery in which a tiny incision is made under the right arm.

Ariel was the first girl west of the Mississippi River to undergo the procedure, which was invented in Brazil, Hill said.

“Her heart will not limit her as she grows and develops and is able to push the limits of her life,” he said.

Through it all, Ariel has been a trouper, Kristal said.

“She has a smile that can light up a room,” she said. “Even when she is tired or in a hospital bed, one little smile and her little chuckle are enough to keep you pushing. She has a way of staring into your eyes and connecting to your soul.”

Yet Ariel’s journey has included many challenges.

While her heart is doing great, she has sleep apnea and other sleeping woes, and often gets frustrated with herself. She’s stubborn about learning sign language, which could help her communicate what she can’t verbalize – behavior which may stem from recently diagnosed autism.

But, Kristal said, “when Ariel is happy, she is really happy.”

“She’s enjoying life, so she makes it easy for us to join her with that,” Kristal said. “She has taught me to celebrate and to relish every milestone. She allows you to focus on smaller things, on silver linings.”