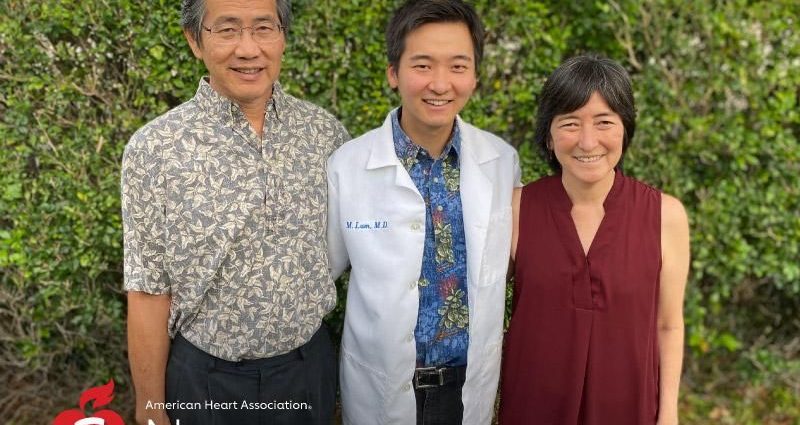 TUESDAY, Oct. 19, 2021 (American Heart Association News) — A month after Lynn Otaguro and Mark Lum brought their new baby, Matt, home from the hospital, they noticed he was fussy and exhausted after breastfeeding.

Matt wasn’t gaining enough weight or growing like other babies his age. At his first checkup, the pediatrician thought Matt may have a heart murmur. The doctor scheduled an echocardiogram. Results revealed Matt was born with a ventricular septal defect, or a hole in his tiny heart.

Doctors told the couple that eventually their son would need to have surgery to close the hole. The Honolulu couple suspected this would come years later when Matt was older and stronger.

A few months later, Matt was still struggling when he breastfed and was underweight. Doctors inserted a catheter into his heart to take a closer look and decided surgery couldn’t wait.

Hawaii’s health care system at the time wasn’t equipped for the surgery Matt needed. So when Matt was 8 1/2 months old, the family – including Mark’s parents – flew to Los Angeles for treatment. On the plane, Lynn worried Matt would catch a virus and the surgery would be postponed. She and her husband also knew the procedure was risky.

“Having a child with a serious health condition can seem overwhelming,” Lynn said. “We took things step by step and tried our best to stay positive and calm during the process for Matthew, our daughter and our family.”

They stayed with Mark’s sister, Susan, and her family. Mark’s parents took care of their 2-year-old daughter, Katherine, while the couple prepared for the hospital. Susan’s friends donated blood and platelets to the blood bank for Matt.

The couple left Matt in the hospital the night before surgery. The next day, they sat nervously in the waiting room as the surgeon closed the hole. The surgery was a success. Doctors discharged Matt just three days later.

As a child, Matt saw a cardiologist every few years. Regular EKGs and ultrasound exams showed his heart was working OK.

There were some challenges. Although he ran cross country at school and hiked with his Boy Scout troop, physical activity tired him out.

“We tried to help Matthew see his health condition as something that needed to be addressed, but not something that should overshadow his life,” Lynn said.

“They never wanted me to see myself as weaker or less,” Matt said. “They wanted me to be strong and have the sense I could do anything anyone else could do.”

Matt’s regular doctor visits combined with watching his father, a primary care physician, care for his own patients, led him to choose medicine as a career.

“I thought it would be extremely meaningful to care for patients like myself,” Matt said.

Now 27, he’s a second-year resident at UCLA Health in Los Angeles in anesthesiology. He likes the idea of working in the operating room with patients and seeing science at work in the moment. He’s considering pursuing cardiac or pediatric anesthesiology.

His own health is never far from his mind either, as a recent scare reminded him.

On a trip home to Hawaii, Matt’s heart rate jumped to 230 beats per minute during a jog with his dad. Back in California, doctors diagnosed him with atrioventricular reentrant tachycardia, or episodes of an abnormally fast heartbeat.

At the University of California, San Francisco – where Matt went to medical school – he underwent an ablation procedure, during which a small amount of heart tissue causing abnormal rhythms was destroyed.

In addition to his upstart career, Matt has volunteered with the American Heart Association, telling his story to first- and second-generation Chinese high school students. He included a presentation on blood pressure so students could help screen their aging parents or grandparents for hypertension.

He knows many people with his condition end up needing multiple surgeries. He’s thankful he’s stable now and can help patients like himself.

“I recognize I was lucky,” Matt said, “and now I’m very invested in heart health.”