AHA News: After 47 Minutes, One Final Try Resuscitated Her 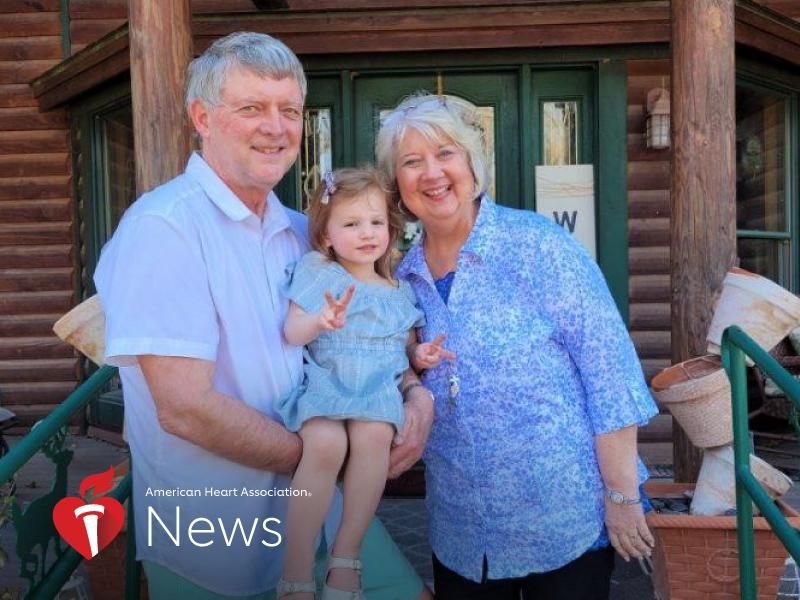 FRIDAY, April 30, 2021 (American Heart Association News) — On a November evening, Diana and Paul Nickel played a spelling game and shared an ice cream birthday cake with their 6-year-old granddaughter, Molly. The couple was staying with Molly and her 8-year-old sister, Kate, while the girls’ parents were out of town.

Around 7:30 p.m., the girls began getting ready for bed. Paul was looking for a book to read to them when he heard a crash from the kitchen. He ran to find his wife of 44 years collapsed on the floor.

Diana was lying on her back with her open eyes staring blankly into space. She wasn’t breathing.

After a minute, he paused to call 911, then followed the emergency dispatcher’s request to count out loud for her.

Paul followed her direction, moving quicker through the compressions.

Meanwhile, Dr. Ryan Jacobsen, the medical director for the Johnson County (Kansas) EMS system, was settling in at home after work. Typically, he turns off his beeper when he’s home. This time he didn’t. He glanced at the emergency call alert and saw the street – only a couple blocks from his house. He headed out to help.

Paul had been performing CPR for seven minutes when the doctor took over.

A minute later, more than a dozen responders arrived, including firefighters, police officers and EMTs.

They placed her on a gurney and used an automated CPR system to try restarting her heart. Paul was startled by the machine’s forcefulness, compressing his wife’s chest.

A defibrillator was used to deliver a dose of electric shock to Diana’s heart. The shock can potentially stop an irregular heartbeat (arrhythmia) and allow a normal rhythm to resume following cardiac arrest. In this instance, it didn’t work. So they tried again. They tried a total of seven times with no visible results.

After 40 minutes, Jacobsen determined it was time for the “Hail Mary” attempt, one last try at resuscitation. Since nothing else was working, he tried the unusual maneuver of putting paddles on her chest and back, what’s known as a double sequential defibrillation. The American Heart Association does not recommend this procedure. The latest research shows its usefulness has not been established. More research is needed to determine its clinical efficacy.

It worked. Officers went to share the news with Paul, who had been encouraged to wait in another room.

“Your wife has regained consciousness, and she’s asking for you,” they said. “We’re ready to transport her.”

Paul went to Diana, about to be put in the ambulance. He told her he loved her – and said goodbye, fearing that she wouldn’t survive or, after going 47 minutes without breathing, would be severely impaired.

At the hospital, Paul learned she was still breathing and conscious.

People congratulated him for saving her life by immediately starting CPR.

“Of course, that felt good on one level, but when you’re in the moment, you’re not sure you appreciate the gravity of the situation,” he said.

Diana had suffered a cardiac arrest, an electrical malfunction of the heart. Doctors thought it was likely from the medication she was on for bronchitis coupled with nighttime cold medication – basically a fluke perfect storm.

Twelve days later, Diana walked out of cardiac rehab with no neurological damage, a miraculous outcome, doctors told her. As a precaution in case her heart’s electricity misfired again, Diana received an implantable cardioverter defibrillator-pacemaker combination.

Both Diana and Paul became inspired to help others. They purchased CPR training manikins and automated external defibrillators – small devices that can shock a heart back to a normal rhythm – to donate to churches, schools, malls and offices. Paul renewed his CPR skills and hopes to resume teaching it.

“We’ve heard so many stories about people not knowing what to do, so we wanted to help,” he said.

In September, Diana’s tale took a frightening turn – an infection, but not COVID-19. A series of complications followed, ultimately landing her in an emergency room in February.

Tests showed multiple blood clots in her lungs, and both bacterial and fungal infections on the lead wire to her pacemaker. She underwent an operation that was supposed to replace the pacemaker, but what doctors found led to a far more invasive surgery. She later underwent another procedure for the new device.

“I am healing well with three nice-sized scars on my chest,” she said. “I call the one in the middle my ‘turkey-basting scar’ and the other two are just blessings to know that we have now found what was making me so ill, and removed it and replaced” it with an upgraded device.

“I’m so gloriously happy that I’m alive and well,” she said. “Faith is a huge part of that for me, as well as the many people who helped during and after.”

Her beliefs were strengthened by something that happened during and after her cardiac arrest.

While recovering, Diana kept remembering a man dressed in jeans, sneakers and a gray hoodie covering his face.

“Everything is going to be all right,” he told her. “Just remain calm and at peace.”

Later, she learned that a neighbor, pastor Chad McDonald, had been praying outside her home as the paramedics treated her and took her to the hospital.

Once Diana was back on her feet, she and Paul personally thanked all first responders and the dispatcher.

After introducing herself as the person he’d prayed for as she was treated and then taken to the hospital, she asked about his memories of that night. Specifically, she wanted to know, “What were you wearing?”

Jeans, sneakers and a gray hoodie, he answered.