AHA News: At 31, a Stroke Immobilized His Right Side. Now He’s a Competitive Bodybuilder. 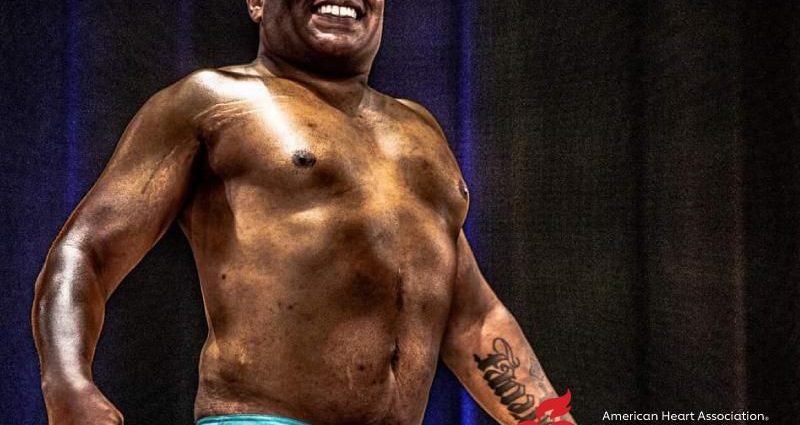 FRIDAY, Oct. 29, 2021 (American Heart Association News) — His headaches were getting worse, but R. Brady Johnson kept running. Running was his release, first while he was an active senior airman in the U.S. Air Force and later in the Air National Guard reserve force.

One day, after completing an easy 6-miler, something felt different, like his heart was beating between his ears. He was scared.

After an MRI at the nearest off-base hospital, then-31-year-old Brady could barely process the news: He’d had a cerebral hemorrhage.

“There’s so much blood and fluid in your brain we can’t understand how you lived this long,” the doctor said.

Brady was sent to a more specialized hospital for surgery to relieve the pressure on his brain and repair damaged blood vessels.

When he woke up the next day, Brady saw his mother and his fiancé, Heather, who is now his wife. He was surrounded by a tangle of tubes. He started to speak but couldn’t. He couldn’t move his right side. During surgery, he had suffered a massive stroke.

Later, the doctor sat with Brady and Heather and painted a grim picture of his future. They said he might never read, talk, walk or drive. And the medications he would be taking might prevent him from having children.

“I suppose they have to give the worst-case scenario, but really there was no positive,” Heather recalled. “We just didn’t know what to expect.”

After a week in the intensive care unit, Brady went to an inpatient rehab facility. His speech already had started to return but he had no feeling in his right side.

The first few days there, Brady didn’t want to do anything. Then, one night, he thought about what he’d learned in the military, and how he’d promised to “defend the country against all enemies, foreign and domestic.”

Now his stroke was the enemy he needed to attack.

Brady wasn’t satisfied with his first physical therapist – she was too easy on him. When she told him it was time to rest, he wanted more. He switched to a sports therapist who kept Brady going even when he wanted to stop.

After four months, he went home using a walker. Heather moved in to help; she left work every day to make him lunch. Her father took Brady to physical therapy every day.

Brady pushed himself whenever he could. Watching sports on TV, he’d lift his legs, stretch and stand during every commercial.

“By the time a game would be over, I’d feel like I had accomplished something,” he said.

The next year, in July 2005, Brady and Heather married. Brady walked down the aisle haltingly, but without assistance.

Retired by then from the Air Force, Brady started working for the Social Security Administration as a claims representative. The next year, the couple had their first of two sons. Although he never regained feeling in his right side, he was able to drive – and run. He ran a 5-kilometer race.

By all indications, Brady conquered the enemy.

Then the headaches returned.

The doctor said scar tissue was rubbing his brain. They could remove it, but it could return. Instead, they gave him a cocktail of pain medications.

Brady felt so tired from the pills that he could only work and sleep. He stopped taking the medications to feel alert and to spend time with his family.

In 2008, after having worked for 20 years for the government, Brady retired. With so much down time, he became sedentary and began overeating.

So had Heather. But the former college basketball player decided to tackle her ballooning weight at the beginning of the COVID-19 pandemic. By eliminating unhealthy food and walking daily, she lost more than 100 pounds in a year and is now successfully managing her Type 2 diabetes.

“I’d gotten lazy, and she was showing me up,” Brady said with a laugh.

Brady went to a nutrition shop near his home in Belvidere, Illinois, to ask about weight loss.

Instead, he started chatting with a fellow customer, a slightly built woman who said she was a natural bodybuilder. That meant she eschewed steroids for vitamins and nutritious meals. He decided to give it a try.

He talked to experts, hired a coach and bought equipment. He also started eating what Heather was cooking.

He’s dropped about 50 pounds and his gait is smoother. He still gets headaches, but he’s learned to live with them.

“What I love about bodybuilding is it’s against me – my body and my mind,” he said. “It’s something I can do the rest of my life. I am building every muscle in my body.”

In August, Brady – now 49 and still compromised on his right side – participated in his first bodybuilding competition.

“It was a high that I’d never felt before,” he said.

Several people there, having heard about his stroke, wanted a photo with him.

“That was so humbling for me,” he said. “That’s the reason why I was out there, letting people know that as a stroke survivor we do move on.”

“Having him walk on that stage with our sons and nephew there, and the look of pride on their faces, that was the best part,” Heather said. “Brady preaches to them all the time, ‘If you want to do something, go out and do it. But you’re going to have to put in the work.'”