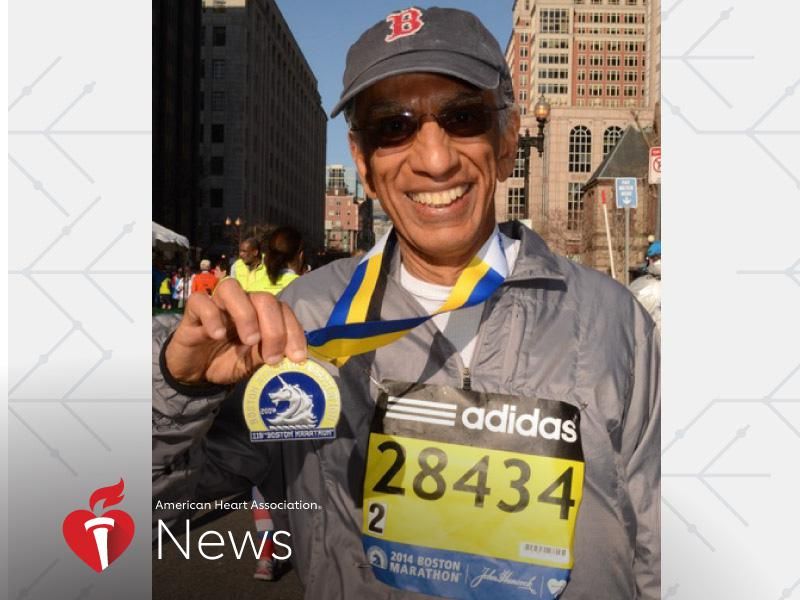 THURSDAY, March 4, 2021 (American Heart Association News) — Because of the lack of oxygen at such lofty altitudes, Dr. Akil Taherbhai needed four hours to climb the last mile to the peak of Mount Kilimanjaro, the highest freestanding mountain in the world.

Savoring the sense of triumph as he finally reached the summit, the family physician who is known as Dr. Taher to his patients in Gadsden, Alabama, reflected on his journey. Not the 19,000-plus feet beneath him, but the pursuit of health and adventure he started only after undergoing heart bypass surgery.

“I could either lead a cautious, mediocre and sedentary life, or I could abandon the ordinary by taking my own journey to the extraordinary,” he said.

Despite a family history of heart disease and his professional understanding of the importance of diet and exercise, Akil spent much of his adult life eating unhealthy foods and getting hardly any physical activity.

“The only muscles I exercised were my eye muscles, looking at people running in the park,” he said. “I depended on my father’s side, which had no history of heart disease.”

In his 50s, though, Akil showed a tendency to follow his mother’s side. He had metabolic syndrome and sky-high LDL, the bad kind of cholesterol. While his body mass index was barely inside the normal range, a distinct pouch protruded from his otherwise slender frame.

“It was visceral fat around my heart, liver and muscles, which is directly related to heart disease,” he said. “When I was 56, coronary artery disease came knocking at my door.”

Akil was visiting London when he first felt chest pain. When he returned home to Atlanta, he saw a cardiologist, who discovered two of the main arteries feeding Akil’s heart were 98% blocked and another was 84% blocked.

His doctor said he could open the blockages with stents via cardiac catheterization or perform bypass surgery. Unwilling to endure having his chest cracked open, Akil selected the less invasive procedure. The blockages were so hard his cardiologist used a diamond-tipped drill to shave through them. During the procedure, Akil had a cardiac arrest.

This might have seemed like a great time for a fresh start. Alas, Akil continued his poor dietary habits and suffered consequences such as diverticulitis, acid reflux, allergies, a twice perforated colon and multiple sinus infections.

“I was in bad shape, miserable and depressed,” he said. “My wife had to carry me to a psychiatrist.”

When he was 61, his stents failed. There was no choice this time; he needed bypass surgery. The idea made Akil reevaluate his life. As he was being wheeled into the operating room, he told the nurses he would do a half marathon within a year.

“I would have walked or crawled if I had to,” he said. “I was so determined.”

Akil made good on his vow. He started by embracing a plant-based diet. His meals included plenty of fruits and vegetables, legumes and beans, and whole grains such as brown rice, amaranth and quinoa. And as soon as he was able, he started exercising in earnest, first walking and then jogging.

“Akil is a comeback kid,” said his wife, Nafisa. “He’s at his best when he meets with an adverse situation.”

Eight months after his surgery, he ran his first half marathon in Nashville. Buoyed by the feeling of accomplishment, he later ran full marathons in Chicago, Boston and Mumbai, raising a total of $23,000 for charitable causes, including $10,000 for the American Heart Association. He also ran two triathlons.

In addition to climbing mountains – starting with Mount Kailash in Tibet at 62 – Akil has bungee jumped in New Zealand, soared over the Brazilian forest canopy and coastline on a hang glider and even jumped out of an airplane.

“Adventure may hurt you, but monotony will kill you,” said Akil, who at 72 continues seeking thrills to check off his bucket list. Next up: swimming with sharks.

Akil’s experiences and renewed appreciation for nature made him realize material possessions aren’t the only things – or even the best things – in life. While he once cruised around in a Mercedes, he now drives a Toyota. And he enjoys the simple pleasures, such as gardening, cooking and spending time with Nafisa, their two adult children and 8-year-old grandson, Kai.

He credits Nafisa for her positive influence, encouraging him to worry less and join her in meditation. At first, he would check his watch every five minutes, but over time, clearing his mind regularly began to work wonders.

“He lets things go now,” Nafisa said. “It’s easy to change one’s work habits, but to change one’s personality 180 degrees is not easy, and that’s what he’s come around and done.”

Excited to share his experience and realizations, Akil started speaking about a heart-healthy lifestyle for neighborhood groups, fraternal organizations and the AHA’s Go Red for Women. He also wrote a book that chronicles his journey and offers helpful tips about diet, attitude and exercise.