Skip to content
WeeklyMD > Blog > Heart / Cardiovascular > AHA News: Eating the Right Insects Can Provide Nutrition … And Might Be Good for the Planet

AHA News: Eating the Right Insects Can Provide Nutrition … And Might Be Good for the Planet 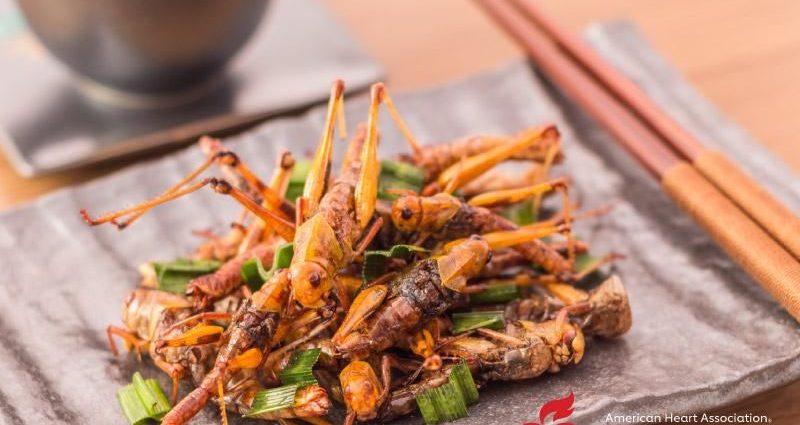 FRIDAY, Oct. 22, 2021 (American Heart Association News) — The notion of biting into a bug or chewing on a cricket might make some people a bit squeamish.

Don’t squash the idea until giving this food some thought.

Some 2 billion people around the world already eat insects to supplement their diet, according to the United Nations’ Food and Agriculture Organization. The practice is known as entomophagy. Consuming the right critters can help address the pressing issues of food security with the world’s population expected to grow to 9.8 billion by 2050, the UN says. Insects can provide nutrition, with high protein, fat and mineral contents.

But it’s not just about food scarcity. Insects are a staple in diets in parts of Asia, Africa and Latin America, and are consumed because of their taste, according to the FAO. For example, mopane caterpillars are considered a delicacy in southern Africa, while weaver ant eggs are a treat in parts of Southeast Asia.

In Western cultures, the practice of eating insects has started to catch on a bit more over the past decade or so, especially since the release of the FAO’s landmark 2013 report that caught the attention of new audiences, said Sujaya Rao, professor of entomology at the University of Minnesota in Minneapolis. The report in part connected insect consumption with larger societal issues like food sustainability and security, and the impact on the environment.

“One of the many ways to address food and feed security is through insect farming. Insects are everywhere and they reproduce quickly, and they have high growth and feed conversion rates and a low environmental footprint over their entire life cycle,” the FAO said in an information guide based on their report.

Globally more than 1,900 insect species are considered edible, with beetles the most common, followed by caterpillars, bees, wasps, ants, grasshoppers, locusts and crickets. Dishes featuring bugs already are becoming more and more popular, as they appear in trendy eating spots across the country.

Celebrity chef Jose Andres’ Mexico City-inspired restaurant in Washington, D.C., serves tacos with chapulines, or grasshoppers. A top-selling concession item at the home of Major League Baseball’s Seattle Mariners is a four-ounce cup of toasted grasshoppers served with savory chili-lime salt seasoning. A popular East Village restaurant in New York City offers, among many other insect-infused dishes, black ant guacamole that features a garnish of salt and – you guessed it – ground-up ants.

Beyond the novelty, insects can offer heart-healthy nutrition, too.

A January 2021 study in Critical Reviews in Food Science Nutrition said edible insects may have “high superior health benefits” due to high levels of vitamin B12, iron, zinc, fiber, essential amino acids, omega-3 and omega-6 fatty acids, and antioxidants. Rao pointed to crickets as a source of protein through their muscle-bound hind legs used for jumping.

Crickets and some other bugs can be raised vertically, Rao noted. This means they can be raised in layers in climate-controlled facilities, offering the possibility of operating year-round and leaving less of an environmental footprint than a livestock farm. One company in London, Ontario, is building what it calls a state-of-the-art facility that will be the world’s largest cricket farm.

Several products on the consumer market feature bugs, such as cricket powder and cricket protein bars.

“Due to long held stigmas, eating bugs is not common in the Western world,” Rao said. But “using insects as ingredients is one strategy, such as cricket flour in cookies. It doesn’t have that negative image. So a lot more people are willing then to give it a try.”

Rao is an author of a 2020 study in the Journal of Insect Science in which college students took part in taste-test surveys of cricket powder brownies to evaluate attitudes related to insects as food.

Students had a taste preference for cricket flour brownies over wheat flour brownies but could not consistently differentiate between brownie types, the study found. They ranked environmental and nutritional benefits associated with insect food products over taste factors alone, and indicated they may buy insect products in the future.

“The more that you can make it look similar to what you are used to at home,” Rao said, “or what your grandmother made, the better.”