Skip to content
WeeklyMD > Blog > Heart / Cardiovascular > AHA News: Genetic Problem Led to a Heart Transplant at 24. Her New Heart Has a Genetic Problem, Too. 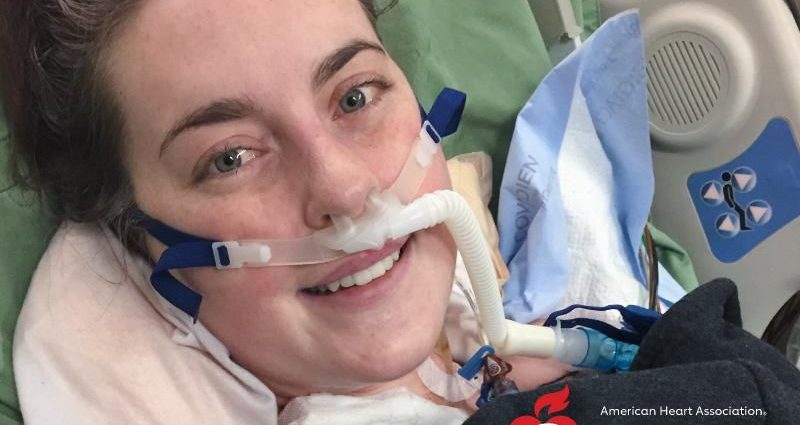 WEDNESDAY, July 14, 2021 (American Heart Association News) — At 13, Leilani Graham was running on the treadmill in her garage when she suddenly collapsed. Her mother, who was supposed to be gone, heard a bizarre moaning sound coming from the garage and rushed to find her daughter unconscious. She immediately called 911.

At the emergency room, an electrocardiogram showed an abnormality in her heart. Further tests showed Graham had an enlarged left ventricle.

“I was told I should have died,” Graham said.

Doctors implanted a defibrillator in her chest that would shock her heart back into a normal rhythm should she again go into cardiac arrest. It saved her life three times.

The first time was several months later. Her PE class was running the mile relay. She’d been told she could no longer do competitive sports or go on long runs. Still, she thought it would be OK to run a single lap.

“I got about three-quarters of the way around the track, felt my legs getting heavy, my vision was narrowing, and I totally passed out,” Graham said.

Three years later, she climbed a dirt hill with friends and felt the same frightening sensations. Realizing what was happening, she told a friend to call 911 before passing out.

The last time was while attending New York University for musical theater. Graham collapsed after walking up a flight or two of stairs following a voice lesson. Somewhat overwhelmed, the 19-year-old finished the semester and then transferred to the University of Southern California, closer to her childhood home in Palo Alto, California.

Genetic testing showed Graham had hypertrophic cardiomyopathy. HCM is cited as the most common reason for sudden cardiac death in young people and athletes under the age of 35, according to the American Heart Association.

It’s often caused by abnormal genes that affect the heart muscle. These genes cause the walls of the heart chamber to contract harder and become thicker than normal. The thickened walls become stiff. This reduces the amount of blood taken in and pumped out to the body with each heartbeat. Symptoms can include chest pain, shortness of breath, fatigue, dizziness, fainting, lightheadedness and swelling.

What made Graham’s case so unique is that her DNA had not one but two disease-causing variants, one from her mother and one from her father, said her cardiologist, Dr. Euan Ashley, a professor of medicine and genetics at Stanford University in California.

While neither parent had yet to exhibit signs of HCM, Graham’s dad had palpitations years later, and doctors implanted a defibrillator in his chest.

Graham’s sister received neither variant from either parent.

“This is similar to the genetic roulette that is at play in every single family,” said Ashley, who oversaw the family’s testing and featured Graham’s journey in his book, “The Genome Odyssey,” which explores how genome sequencing is being used to help prevent, predict and beat disease. An individual’s genome is their unique code containing information about everything from likely height, weight, hair color and eye color to predisposition to thousands of diseases.

Having two variants likely explained why Graham had such a severe case of HCM at such a young age, Ashley said. The severity caused her heart to stiffen and weaken enough that she went on the transplant list at 24, just when she was beginning a full-time job.

Graham approached the transplant as something to cross off her list so she could get on with her life.

“It did not at all end up being the case,” she said.

After four months on the waiting list, she received “the call” on Feb. 2, 2016. The transplant was a success. When Ashley visited Graham, he was amazed at how well she looked – younger and fitter despite being in the ICU. She was sitting up in bed reading. Her new heart was pumping a lot more blood.

“I thought, ‘Wow, what a blessing. She’s really just going to sail through this,'” he said.

But later that day, Graham’s new heart paused briefly. When it happened again, doctors did an ultrasound. Her heart paused for a long time. She was rush to the operating room and connected to a machine that took over the functions of her heart and lungs. She remained on life support until Valentine’s Day.

Eventually, she was well enough to go home despite doctors not knowing what caused the problem with her new heart.

On the one-year anniversary of her transplant, Graham felt unable to breathe and the all-too-familiar sensation of blacking out. She went to the hospital, but things remained a mystery for several more months. Then a medical device recording her heartbeat discovered complete heart block; she needed a pacemaker.

Graham developed a nagging suspicion about her new heart, so she asked Ashley to have it genetically tested. It’s normally done by drawing blood, but they obviously couldn’t draw a sample from the donor. So doctors sequenced the donor’s genome using part of the heart that had been taken for biopsy post-transplant. It showed a mutation in a gene likely to cause electrical problems in the heart.

“That was, personally, for me, like, ‘Wow, I can really trust my gut on this,'” she said. “I understand enough to ask these questions.”

Now 29, Graham considers herself a medical outlier whose trajectory is to help others by writing, speaking and pursuing a career in patient advocacy. It’s not a path she would have chosen for herself, but it’s the road she’s on.

“I think what I’ve come to learn through all of this is maybe who we are can be defined by how we cope, with both where we have come from and where we are going,” she writes in her blog. “Where I come from has been rough and heavy, but it has also been rare and beautiful.”