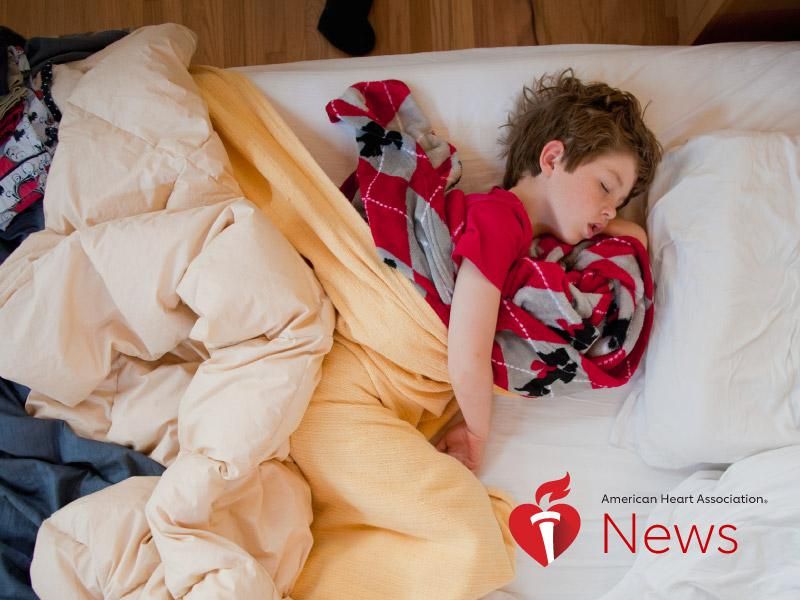 FRIDAY, May 21, 2021 (American Heart Association News) — Children with obstructive sleep apnea who don’t outgrow it by adolescence have nearly three times the risk of high blood pressure as teens compared to those without the breathing issue, a new long-term study shows.

But children whose sleep apnea disappears in adolescence don’t have any increased risk, the study found.

Obstructive sleep apnea, when breathing is paused during sleep, and blood pressure problems have been linked before. But few researchers had taken thorough, long-term looks at the problem in children, said the study’s lead author, Julio Fernandez-Mendoza. He’s an associate professor at the Sleep Research and Treatment Center of the Penn State University College of Medicine in Hershey, Pennsylvania.

The findings, which are considered preliminary until published in a peer-reviewed journal, were presented Friday as part of the American Heart Association’s virtual Epidemiology, Prevention, Lifestyle & Cardiometabolic Health Conference. There are three types of sleep apnea, according to the American Academy of Sleep Medicine, with obstructive sleep apnea – caused by airway blockage – being the most common. The academy estimates sleep apnea affects nearly 30 million adults, with most cases undiagnosed.

But it also affects many kids.

The new study looked at 421 children, ages 5 to 12, who were monitored overnight at a sleep lab. Of those children, about 12% had at least mild obstructive sleep apnea.

After more than seven years of follow-up, when most of the children were between ages 12 and 19, sleep apnea had disappeared in a little more than half of them. Children often outgrow the problem, Fernandez-Mendoza said.

After adjusting for factors such as sex, race/ethnicity, age, levels of obesity and whether the children had their tonsils or adenoids removed, researchers found children whose sleep apnea persisted into adolescence had 2.9-fold higher odds of having high blood pressure than children who never had the problem. If sleep apnea began in their teen years, they were 1.7 times more likely to have high blood pressure.

Obstructive sleep apnea can be caused by problems such as enlarged tonsils or adenoids in some kids, but obesity is a critical factor, Fernandez-Mendoza said.

Dr. Carissa M. Baker-Smith, director of the Pediatric Preventive Cardiology Program at the Nemours/Alfred I. duPont Hospital for Children in Wilmington, Delaware, called the study “significant” for its long-term approach. She said the research also highlights the importance of considering the quality of a child’s sleep as a risk factor for high blood pressure in children.

“What this is saying is one of the reasons that kids have high blood pressure is because they have obstructive sleep apnea – even after we control for other known risk factors, such as obesity,” said Baker-Smith, who wasn’t involved with the study.

Sleep, high blood pressure and obesity are entwined factors in heart disease, she said. In a young person, such factors become precursors for more advanced heart disease in adulthood if they aren’t treated.

Because high blood pressure can lead to serious harm, attention to the quality of a child’s sleep is important and a diagnosis of apnea should not be ignored, Baker-Smith said.

Still, not every child who snores has sleep apnea, Fernandez-Mendoza said. But loud snoring – snoring heard through a bedroom door – is the most common indicator. Others include irritability or excessive daytime sleepiness.

Sometimes, the child’s tonsils or adenoids need to be removed. But often, he said treatments include carefully structured weight loss as well as various kinds of positive airway pressure therapy that provides a stream of air through a mask to keep the airway open.

Fernandez-Mendoza’s advice to parents is to not assume that snoring in a child is cute or that their being overweight is normal. “Take it seriously, consult with your pediatrician,” and potentially have the child evaluated with a sleep study.

Pediatricians, he said, need to consider sleep apnea as a systemic problem.

Fernandez-Mendoza is continuing to track the children, some of whom are as old as 30 now, and plans to report on other heart-related issues down the road.

2021-05-21
Previous Post: Approved Vaccines ‘Respond’ to All COVID Variants So Far: WHO
Next Post: Elections Can Be Tough on Americans’ Hearts