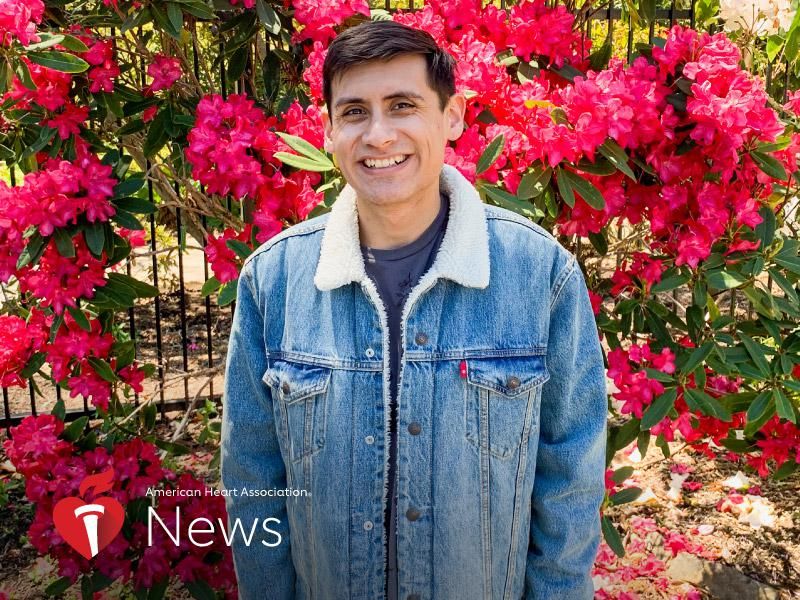 FRIDAY, June 4, 2021 (American Heart Association News) — When Arthur Castro was born, doctors could immediately tell something was wrong. The color of his skin belied trouble with his heart that hadn’t been picked up on several ultrasounds typical of a routine pregnancy.

“His oxygen was very low. He was very purple and blue, and they had to revive him (with CPR),” his mom, Sophia Castro, said. “As soon as I delivered him, they just took him.”

Tests at the small hospital in Flagstaff, Arizona, revealed multiple congenital heart defects that would need to be monitored and eventually require open-heart surgery.

Arthur was born with aortic and mitral valve stenosis with coarctation. In other words, he had narrowed valves, and blood didn’t flow properly throughout his body. It made his heart work harder, which can cause fatigue, shortness of breath, chest pain and a rapid, fluttering heartbeat. His aorta, the heart’s major artery carrying blood to the body, also was narrowed.

The newborn was home for only a few weeks when he appeared to have a cold. Sophia took him to the doctor. The problem was the narrow aorta; not enough blood was getting to the rest of his body. He was flown to a larger hospital in Phoenix for an emergency surgery.

Doctors feared Arthur wouldn’t live long enough to even reach the operating room. They also feared he wouldn’t survive the operation. The challenge was his small size.

Using an improvised ballooning technique, the surgeon was able to open the aorta.

When Arthur was very young, his family moved to the Inland Empire area of Southern California, where his parents and extended family helped take care of him. He lived a fairly typical life for several years. The exceptions were limitations on exercise, sugar and caffeine, and having to wear a heart monitor after episodes of an irregular heartbeat.

At 12, Arthur complained of headaches, so doctors ordered a CT scan of his brain. It revealed he’d suffered a stroke that damaged his optic nerve. His ophthalmologist told him it likely happened during surgery as a baby. While Arthur had been wearing glasses for years, he didn’t realize the severity of damage to his peripheral vision.

“Little signs were there like bumping into things or not even being able to see change on the floor,” Arthur said. “I would trip over things.”

Despite his limited vision, Arthur – who is now 21 – makes the most of what he can see.

“Believe it or not, I’m a legally blind photographer,” said Arthur, who runs an arts magazine that he launched two years ago. “I still do take photos, and I do portrait photography. I have tunnel vision, so I see only what I’m directly staring at.”

Among the things he can’t do is drive. That’s a challenge for someone living and dating in Southern California.

“I’m hoping self-drivable cars become mainstream soon because, for people like me, it would benefit us a lot,” he said. “Depending on others to get around just isn’t fun.”

Arthur also has postural orthostatic tachycardia syndrome, which can affect the blood flow and cause a rapid heartbeat and fainting, and mast cell activation syndrome, a disease that causes repeated episodes of the symptoms of anaphylaxis, a severe allergic reaction. Additionally, he has obsessive-compulsive disorder in the form of ruminations and distressing, anxious thoughts.

“It’s a rollercoaster,” he said. “My body definitely takes a toll.”

Arthur faced one of his biggest challenges last August: open-heart surgery during the pandemic.

Doctors determined he needed a new aortic valve, so they replaced his old one with his pulmonary valve, then put a tissue valve in his pulmonary valve’s place. He was hospitalized for five days following the surgery. He wrote about the experience for his magazine. A cousin created cover art for the issue showing a bare-chested Arthur and his scar.

“I’m trying to explore avenues of becoming a licensed clinical social worker,” he said. “I have so much experience with all these different conditions, why not help other people?”

Advice he would share with others facing a similar journey is to persevere, have compassion for yourself and try to be happy.

“I noticed from everything I have been through I have not allowed myself to truly be happy,” said Arthur, who hopes one day to find a boyfriend and true love. “I fear happiness because then I have something to lose. I’m trying to get out of survival mode and allow myself to feel peace. Be kind to yourself and allow happiness in again. We deserve it.”