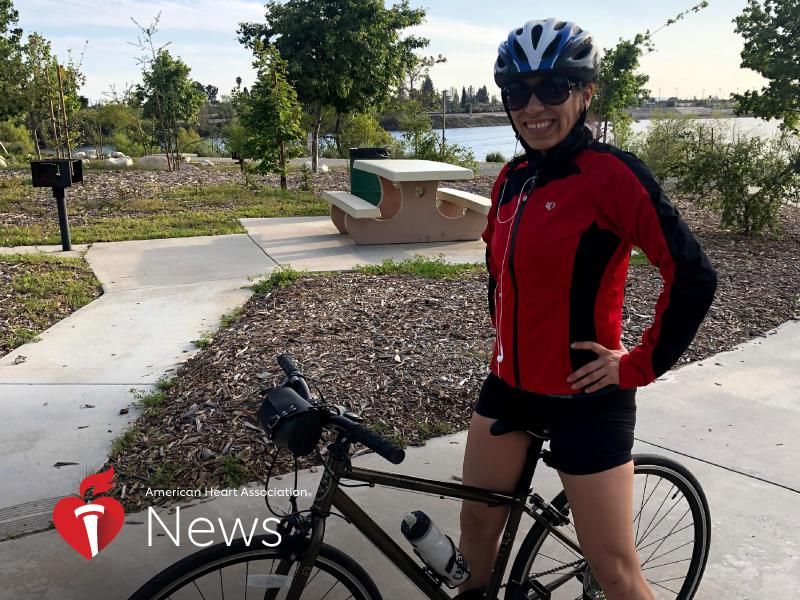 WEDNESDAY, May 19, 2021 (American Heart Association News) — One morning when she was 24, Andrea Paez woke up to find dark red blood on her pillow. She felt exhausted and nauseous, with a pounding headache.

Looking in the mirror, she realized the blood had come from her nose.

Andrea had had occasional seizures throughout her adolescent and teen years. She figured she’d had one overnight.

Over the years, doctors had told Andrea she might have epilepsy, but she’d been given no firm diagnosis or medication. She also had no limitations. Constantly active, she was a goalie on a soccer team and played water polo.

She’d grown up in both Ecuador, where her parents are from, and California. She lived with her parents, brother and sister in Los Angeles, and attended a community college nearby.

On the morning of the bloody nose, she told her parents she felt sick and unsteady. But it was the first day of her second semester of school and she didn’t want to miss classes.

“We need to take you to the hospital now,” her mother said.

Andrea declined and insisted she’d feel better throughout the day.

On her drive to school, she felt so ill that she instead drove to the hospital. She left her car parked on a curb and made her way into the emergency room.

She woke up that night in a hospital room. She couldn’t move the left side of her body. Her face drooped to one side. She saw her mother sitting in a chair next to the bed, sobbing.

The next day, doctors told Andrea they didn’t know what caused her paralysis. With her medical history, they said it could be the result of a grand mal seizure and would likely be temporary. She felt anxious, confused and exhausted.

Andrea’s older sister, Maria Jose “Josie” Paez, remembers being called to the hospital to see her sister and also to translate for their parents, who spoke only Spanish.

“We’ve done every test on her and we have no idea what the problem is,” the doctor told her. “Do you think this is mental? Could she be making this up?”

Josie was shocked and offended. She felt the doctor was discriminating against the family because they’re Hispanic and the hospital was in a lower-income area.

“If anyone is going to make something like this up, it’s not Andrea,” Josie replied.

Although Josie was concerned, she had faith her little sister would pull through.

At the time, Andrea didn’t share those feelings. She struggled with the idea of going from athletic to nearly immobile overnight.

One night in the hospital, she decided to take her own life. But before causing herself any harm, she had a vision of a nun telling her, “This is just the beginning of a new life. It doesn’t have to be the ending.”

People have told her she imagined the nun, but in her mind, the woman was real. And motivating.

Within three weeks, Andrea’s face returned to normal. She spent a month in speech and physical therapy, then returned to her family’s apartment in a wheelchair. Her mother took her to physical therapy at a rehabilitation center for six weeks. When insurance couldn’t cover any more sessions, Andrea joined a gym, doing the same exercises she’d learned in physical therapy.

“Mom took a leave from her job to be there with me,” she said. “With my right side, I’d go at it four hours a day, Monday through Sunday. I was determined to walk.”

Within half a year, she was using a walker. Half a year later, she was walking on her own.

Months later, Andrea learned she was pregnant. Because of her seizures and a history of ovarian cysts, she was deemed high risk and sent to a hematologist. This doctor uncovered the root of her paralysis: A stroke caused by a blood clot in her brain.

“I could not believe the doctors before didn’t know that,” Andrea said. “I feel like if I hadn’t been pregnant, I never would have known. Finally I felt like someone could help me.”

Under the doctor’s care, her pregnancy went well. She gave birth to a son, the first of two.

Before her stroke, Andrea hardly paid attention to what she ate. Now she follows a plant-based diet and swears by her herbal teas and morning ginger shots. Josie took note and has reduced the amount of sugar she and her three sons consume.

After Andrea recovered, she returned to community college. She earned her associate’s degree in paralegal studies in 2018 and now assists Josie, who is a lawyer. Andrea also obtained a nutritional coaching license.

Since 2013, Andrea has been a Zumba teacher. She teaches an outdoor class six days a week and devotes part of one class a week to discussing nutrition. A couple of her students are stroke survivors.

“If I can change one person’s mind about the way they eat, I feel like I’ve helped,” she said.

Andrea said her stroke and recovery showed her how to love and believe in herself.

“At one point, I thought I’d never be able to live the life I’d hoped to live,” she said. “Now I celebrate every day.”