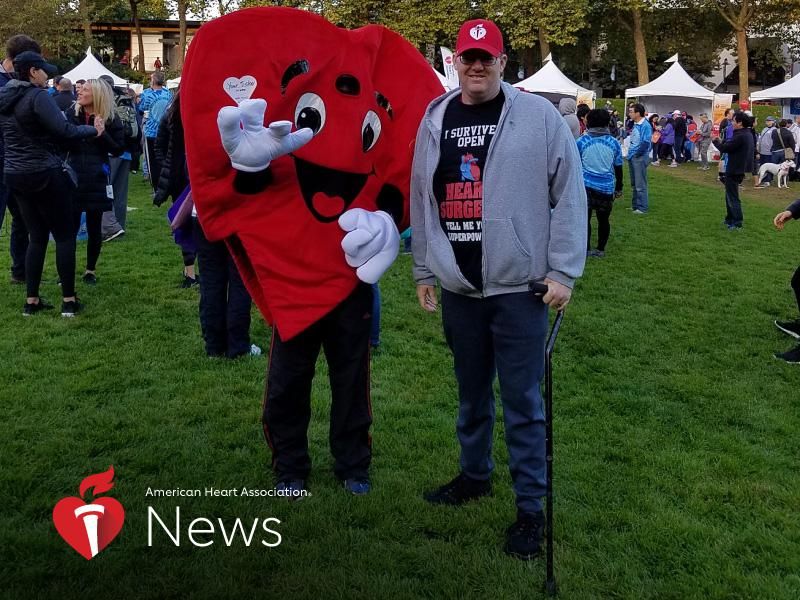 The therapist took his blood pressure reading. It was dangerously high – 200/100.

“You’re not going anywhere until someone comes to get you,” she told him.

Pete, who lives in Lake Stevens, Washington, called his wife, Lisa. She took him to an urgent care clinic. Doctors there recommended he get more testing from his physicians.

Nearly two decades before, doctors told Pete he had high blood pressure and Type 2 diabetes. He’d been taking medication and thought they were under control.

However, he realized that for the past few weeks, he’d felt a burning sensation in his chest, especially when he laid down. He’d been taking something for heartburn, but it didn’t seem to help.

“He had never had heartburn before and it wasn’t going away,” Lisa said. “So I kept pushing him to talk to his doctor.”

Pete went for a stress test and an angiogram. The doctor advised him not to worry if it took a long time because that actually meant good news; it was a sign that the vessels were clear, and the search was continuing just to make sure they didn’t miss anything.

“Was that a long time?” Pete asked.

Told it wasn’t, he braced for bad news. He was waiting in a recovery room with his wife and daughter when a doctor introduced himself as the person who would be doing his surgery.

Then came another stunner: It would be a quadruple bypass.

Pete was 50 and despite having two major risk factors, he hadn’t given much thought to his chances of suffering a heart attack. His dad also had Type 2 diabetes and his mom had high blood pressure, and neither had ever had a heart attack.

“I got the medication and thought that was it,” he said. “I kept drinking sodas and eating sugar. I wasn’t a good diabetic.”

About six months before, Pete shattered his left kneecap in a work accident. As he recovered from two knee surgeries, he found himself easily winded, at times even having to stop walking so he could rest. After his heart surgery, Pete realized the healing knee hadn’t been slowing him down – it was his heart struggling to pump blood through clogged arteries.

Walking remains a favorite activity. He goes out several times a week, in addition to walking his chihuahuas Ace and Pixie.

He also learned how important diet and exercise are to protecting heart health.

Soon after Pete was told he needed heart surgery, Lisa and their daughter, Sarah, overhauled the contents of their pantry. Out went foods high in added sugars, sodium or fat; in came more vegetables and lean meat.

After seeing how much sodium was in their favorite canned soup, “we realized we needed to learn how to cook our own,” Lisa said. Then there was his mom’s delicious fried chicken.

“I still crave it,” Pete said, “but I won’t touch fried foods now.”

Sarah moved back home after Pete’s surgery. She often accompanies her dad to doctor’s appointments when Lisa can’t or attends by phone, asking questions and serving as an advocate. The experience showed the family how important it is to advocate for your health, Lisa said.

“Don’t be afraid to ask questions if something doesn’t feel right,” Lisa said. “You know your body.”

Pete said the experience helped him realize the importance of taking his health seriously.

“I’m grateful for my knee being broken. It saved my life.”

2021-04-06
Previous Post: She’s Beating Leukemia With a Healthy Change to Her Diet
Next Post: AHA News: Want to Help Fight for Health Justice? It May Be Time to Listen