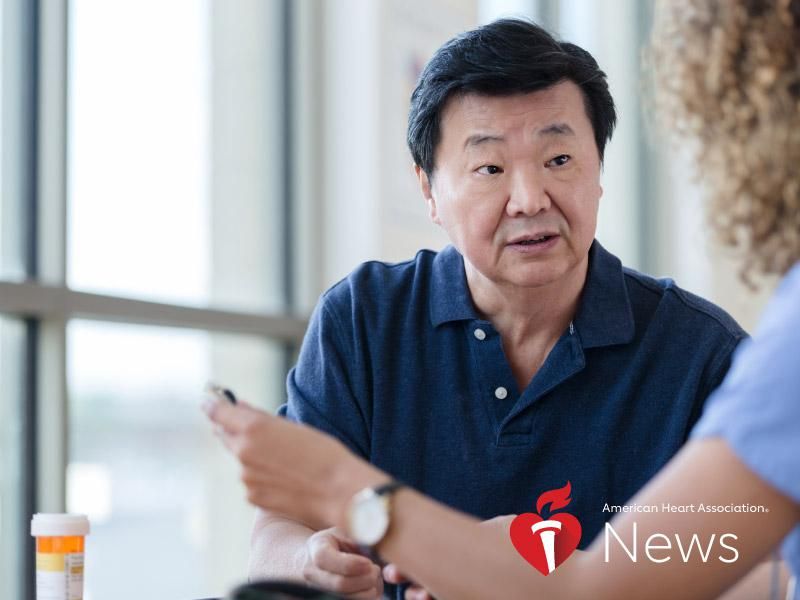 TUESDAY, May 18, 2021 (American Heart Association News) — Large health studies sometimes paint a rosy picture of Asian Americans in comparison with other groups. But when researchers aren’t using a broad brush, the portrait can be quite different.

When viewed not as a single entity of 20 million people but as people of Chinese, Filipino, Indian or other distinct backgrounds, significant differences – and health disparities – appear.

In a 2019 study of electronic health record data from Kaiser Permanente health plan members in Northern California, the frequency of cardiovascular risk factors such as obesity, smoking, diabetes and high blood pressure differed significantly among Asian ethnic groups. While that study showed 23.1% of all Asian adults had diabetes, the levels ranged from 15.6% for Chinese people to 31.9% for Filipinos.

“If we had only looked at the aggregate, we would have missed these differences,” said the study’s lead author, Nancy Gordon, of the Kaiser Permanente Division of Research in Oakland.

The problems that come from lumping data together are not unique to Asian Americans, said Stella Yi, an assistant professor in the department of population health at New York University’s Grossman School of Medicine. But those problems do reflect historical and ongoing bias in how research is done.

“We’re viewed as a niche community,” she said. “We’re viewed in a very particular or stereotypical light as being healthy, wealthy and wise. But we’re not.”

According to the Pew Research Center, most Americans of Asian descent trace their origins to 19 nations. As of 2019, most Asian Americans came from six groups – Chinese, Indian, Filipino, Vietnamese, Korean and Japanese.

A world of differences is reflected in those groups.

For example, Asian Americans are less likely than Americans overall to live in poverty, 10% versus 13%, according to the Pew Research Center. But taken individually, 12 of the 19 Asian ethnic groups the center analyzed had poverty rates as high as or higher than the U.S. average.

Health researchers often can’t split Asians into subgroups because the data simply doesn’t exist, Gordon said. It wasn’t until 1997 that federal guidelines began to separate people of Asian background from Pacific Islanders or native Hawaiians. In 2011, the Affordable Care Act called for more detailed categories, but states can collect as much or as little information as they want, and the Centers for Medicare and Medicaid Services, which administers those programs, uses the broad term.

Geography is another part of the research puzzle. A sample of “Asian Americans” might mean different things in different parts of the country. In California, the largest Asian communities are Chinese and Filipino. In Texas, it’s Indian. In Louisiana, it’s Vietnamese. And in Minnesota, it’s Hmong.

Studies that focus on a single subgroup can be inappropriately extrapolated, Yi said. Results from one famous heart study, for example, were reported as applying to all Asian Americans, even though it examined only Japanese men.

Large-scale studies can be valuable, Yi said, and with them come generalizations. “The aggregate is OK, as long as you complement it with subgroup-specific work,” she said. “But we’re not doing that.”

The repercussions of that go beyond research, she said. Inaccurate data can cause doctors to be misinformed or public health dollars to be misallocated.

It affects people on an individual level, too.

Yi, who is Korean American, has dealt with health issues in her immediate family for which there is limited research, such as jaundice in newborns of East Asian descent and body mass index thresholds in an older child.

With the older child, it was only because of her own research on Asian American obesity that she knew to press the issue with her doctor – who was Indian himself, and therefore supportive. And when she started that research, peer reviewers told her, “This is not a problem that’s of significance.”

At times, she said, “I really questioned science’s ability to address the well-being of my family members, and myself, quite frankly.”

The solution, she and Gordon said, is more detailed research.

Yi said widespread training and education are needed, for the public in general and researchers in particular, to address the problem of implicit bias in the scientific community and end “the way that Asian Americans get brushed under the rug with the health disparities conversation.”

Too often, she said, she sees health reports about health disparities where “there’s no Asian category in there. It’s not because the Asians didn’t have the disparity. It’s because they weren’t in the data in the first place.”