Skip to content
WeeklyMD > Blog > Heart / Cardiovascular > AHA News: Watermelon Is a Summertime Staple. But What’s Hidden Behind the Sweetness?

AHA News: Watermelon Is a Summertime Staple. But What’s Hidden Behind the Sweetness? 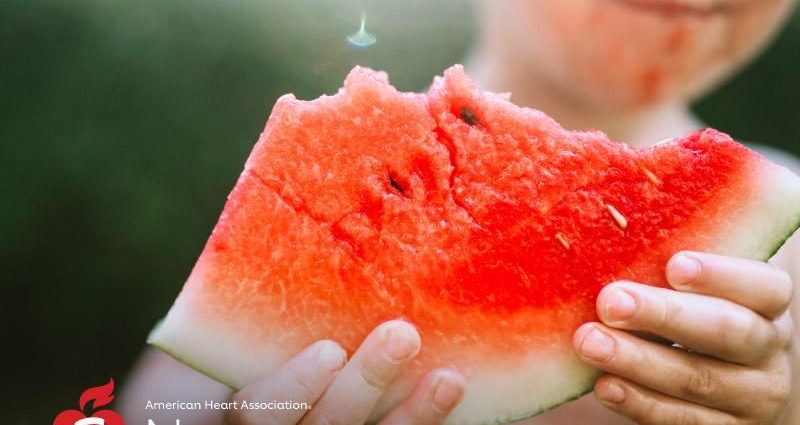 THURSDAY, July 1, 2021 (American Heart Association News) — Whether they’re serving as snacks at a family reunion or props in a late-night comedy act, watermelons and fun just seem to go together. But how does watermelon hold up health-wise?

Fruit is always part of a healthy diet. But watermelon’s combination of nutrients makes it special, Allerton said.

It’s a rich source of minerals such as potassium and magnesium. It’s also a good source of vitamins C and A (plus beta carotene, which helps produce vitamin A), and it has fair amounts of vitamins B1, B5 and B6. You get all of that for only 46.5 calories per cup.

Befitting its name, watermelon is about 92% water, which suggests why ancestral watermelons were carried in Africa’s Kalahari Desert as long as 5,000 years ago. This is a treat with a lineage: Modern-looking versions are depicted in ancient Egyptian tombs.

Where watermelon really stands out is in its concentration of certain antioxidants, which regulate cell-damaging free radicals in the body. “Our body has its own antioxidant system, but it helps to get a boost from our diet,” Allerton said. “And watermelon is a good source of those antioxidants.”

Lycopene, which gives watermelon its reddish color, is one of those antioxidants, along with vitamins C and A. Lycopene also works as an anti-inflammatory and has been linked to lower stroke risk. It is most abundant in cooked tomato products, but watermelon’s lycopene levels are about 40% higher than raw tomatoes.

And watermelon is high in an amino acid called citrulline, which has been a focus of Allerton’s research. “Watermelon is pretty unique because not a lot of foods are high in this,” he said.

In a small 2013 study published in the Journal of Agricultural and Food Chemistry, citrulline in watermelon juice was credited with helping relieve sore muscles in athletes.

Citrulline also is linked to the production of nitric oxide, which is important for the health of blood vessels. Several small studies suggest citrulline in watermelon extract could lower blood pressure, although those effects were seen in people eating the equivalent of more than 3 pounds of watermelon a day for six weeks.

That’s a lot of watermelon. But aside from the general idea that overindulgence in anything is a bad idea, Allerton said there’s no downside to enjoying it.

Even though it has natural sugar and a high glycemic index – a measure of how fast sugar enters the bloodstream – it has a low glycemic load. That means its actual effect on blood sugar is small. And it will fill you up faster than, say, a bowl of cookies.

All nutrition and science aside, afficionados of the fruit just enjoy the taste. Superfan Mark Twain wrote, “It is the chief of this world’s luxuries, king by the grace of God over all the fruits of the earth. When one has tasted it, he knows what the angels eat.”

Allerton prefers his straight up, but he adds that watermelon juice retains many of the benefits of the whole fruit because so much of the fruit is water already.

That makes watermelon work well in smoothies. Or you can turn it into a fruit salsa.

Experts agree the secret to finding a ripe one is to look for a creamy yellow spot from where the watermelon sat on the ground. If the spot looks more white than yellow, then the melon may not be fully ripe. Weight also is a sign of quality – the heavier the better.

But most experts say you can’t learn much about a watermelon’s ripeness from thumping one. So you can probably leave that to the comedians.