AHA News: When Her Heart Stopped After Her Dog Died, Doctors Said It Was Broken Heart Syndrome 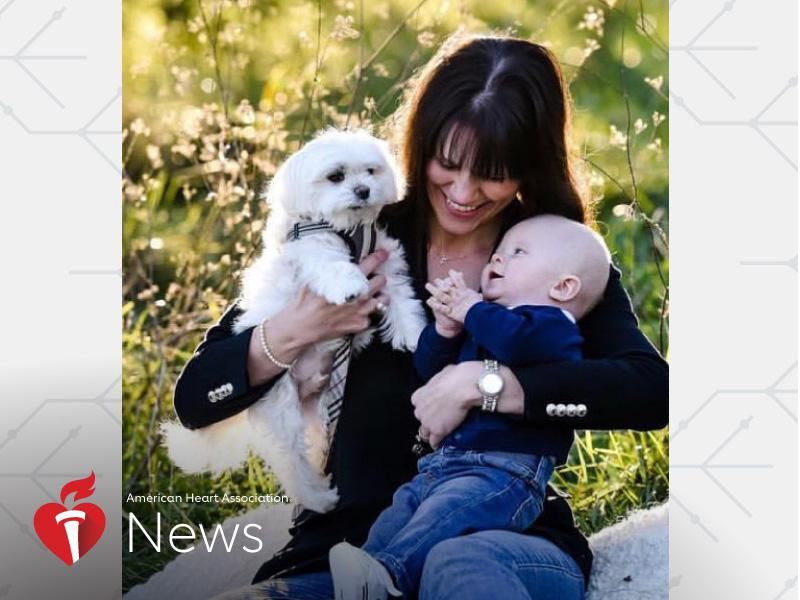 TUESDAY, March 30, 2021 (American Heart Association News) — Tess and Dan Kossow did all they could to have a child.

When they turned to in vitro fertilization, their first attempt appeared to work. But then Tess had a miscarriage.

“It was early in the pregnancy,” she said, “but devastating nevertheless.”

While Dan shared her grief, she had another source of support: Mr. Big, their ironically named 7-pound Maltese. Tess loved playing mom to him – dressing him in fun outfits, bringing him on trips, even taking him to see Santa Claus.

“Mr. Big had a bigger-than-life personality for being such a small guy, and everybody loved him,” she said. “It was a very different type of bond than I’d ever had.”

By then, another IVF attempt had been successful. The couple had a 2-year-old son, Ferris.

Not long after her beloved canine died, Tess, Dan and Ferris met Tess’s parents at a farm to pick pumpkins for Halloween. As they walked toward the patch, Tess felt sharp pain in her left arm.

“I have an extremely high tolerance for pain, but this was like nothing I’d ever felt before,” she said.

Within minutes, the pain was accompanied by an intense feeling of pressure in her chest. Tess told Dan she thought she was having a heart attack. He immediately called 911.

Paramedics took her to a hospital 20 minutes away. That night, after Dan and Ferris drove two hours to their home in Carmel, Indiana, her chest pains returned. Then she went into cardiac arrest.

“They said I died,” Tess said. “My heart stopped, and there was no blood flowing.”

Doctors resuscitated her, then put her on a ventilator and into a drug-induced coma. When Tess awoke, Dan was by her side.

“The best gift I ever had was being told, ‘You’re still here,'” she said.

Doctors weren’t sure why she went into cardiac arrest. Tess, who turns 38 in April, was otherwise healthy, followed a nutritious diet, exercised regularly and had no family history of heart disease.

But once doctors learned about Mr. Big, they diagnosed Tess with takotsubo cardiomyopathy, a temporary form of heart failure caused by acute stress or grief that’s also known as broken heart syndrome.

They sent her home with a wearable defibrillator to monitor her heart and send a shock if it detected an irregular rhythm. About two months later, she had a defibrillator implanted in her chest.

“There’s nothing she did wrong to make it happen the first time, and we don’t know for sure that it couldn’t happen again,” said Dr. Jeffrey R. Mossler, a cardiologist and electrophysiologist at Indiana University Health. “The device acts as a sort of safety net.”

While grateful to be alive, she struggled with depression and anxiety. Despite the diagnosis and the preventive device, she feared her heart might stop again.

Taking care of Ferris helped. So did the outpouring of love, flowers and meals from her friends and family. And she received dozens of messages from people around the globe – fans of the two children’s books she wrote about IVF.

“I felt a sense of community that I’d never experienced before,” she said.

Determined to raise awareness about heart disease, Tess now volunteers for the American Heart Association and was named one of its “Woman of Impact.”

“This is very near and dear to my heart, and I need to talk about it,” she said. “There are a lot of stereotypes about who gets heart disease, but it can happen to anybody.”

Recently, Dan and Tess adopted a Havanese puppy, Gatsby. He’s quickly made himself at home, befriending Ferris and the family cat and keeping Tess company in her office as she writes her next book.

“It feels like we’re all back to center,” she said. “I’m laughing and enjoying my life. The ‘why me’ game is no longer played.”