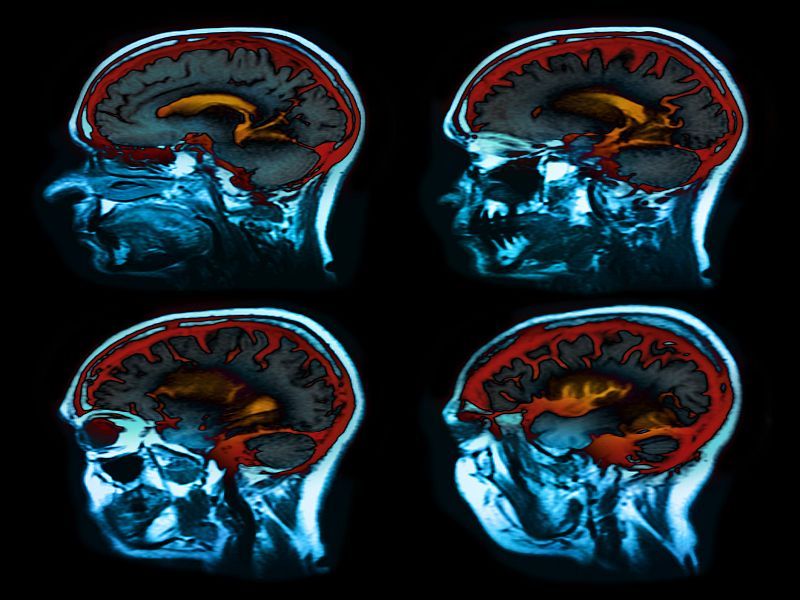 MONDAY, May 3, 2021 (HealthDay News) — Parkinson’s disease is widely seen as a movement disorder, but it can cause an array of symptoms, including hallucinations. Now a new study has shed light on what is happening in the brain during those disturbances.

The study focused on Parkinson’s patients who have so-called presence hallucinations — a false feeling that another person is nearby.

Researchers found that they were able to induce the hallucinations in a group of Parkinson’s patients using a fairly simple “robot ghost test” — which involved a robotic arm that touched the patient’s back.

That, in turn, allowed them to map the brain activity that seemed to underlie the hallucinations — including disrupted connections in parts of the brain’s frontal and temporal lobes.

Experts said the findings — reported April 28 in the journal Science Translational Medicine — could lead to a better understanding of Parkinson’s hallucinations.

One eventual hope, the researchers said, is to develop an objective way to diagnose and delve into individual patients’ hallucinations.

Right now, diagnosis generally depends on patients telling their doctors about their hallucinations — which many hesitate to do.

So the problem is under-diagnosed, said Fosco Bernasconi, one of the researchers on the study.

“Our robotic procedure provides the opportunity to investigate specific hallucinations in real time, and in a fully controlled environment and conditions,” said Bernasconi, a senior scientist with École Polytechnique Fédérale de Lausanne in Geneva.

Parkinson’s disease affects nearly 1 million people in the United States alone, according to the Parkinson’s Foundation.

It involves an abnormal buildup of a protein called alpha-synuclein in the brain. Over time, the brain loses cells that produce dopamine, a chemical that helps regulate movement and emotional responses.

The most visible symptoms of Parkinson’s are movement-related — such as tremors, stiff limbs and coordination problems.

“But Parkinson’s is complex. It’s much more than a movement disorder,” said James Beck, chief scientific officer for the nonprofit Parkinson’s Foundation.

The disease is one of the brain, Beck explained, and it can cause symptoms ranging from problems with memory and thinking, to depression and anxiety, to impairments in speech, vision and sense of smell.

Then there are the symptoms of psychosis — which, Beck noted, is a “hard word” for people to digest. Hallucinations fall into that category, but issues such as presence hallucinations are considered “mild.”

“People are aware that they’re having them,” Beck said. “They’re completely cogent.”

A patient involved in the new research, Joseph Rey from Geneva, began to have presence hallucinations after undergoing surgery for Parkinson’s. He would have a recurring sensation that he was being accompanied by one or more people, either behind him or by his side.

Rey has been unbothered by it, though.

“I call them my guardian angels,” he said. “They do me no harm. They follow me around. It’s reassuring in a way, because I am not alone.”

Another patient, Maurizio De Levrano of Martigny, Switzerland, experienced presence hallucinations — what felt like the “ghost of my mother” — as well as visual ones.

“I see spiders of sorts falling from the ceiling out of the corner of my eye,” he said. “I know very well that they are not there, but instinctively, I am always compelled to turn and look.”

Visual hallucinations are more common in Parkinson’s than the presence type, Beck said. Again, people can be unbothered by them.

“But it’s still important to let your doctor know about them,” Beck said.

For one, he explained, hallucinations are sometimes related to Parkinson’s medication changes, or interactions among different medications a patient is taking.

In those cases, Beck said, it might be possible to adjust a medication. There are also two drugs — clozapine and pimavanserin — that can be prescribed to ease hallucinations, he noted.

The new research involved 26 Parkinson’s patients who underwent the robotic test. Each patient was asked to make repeated “poking” gestures, while a robotic arm mimicked the gesture on the patient’s back. Sometimes the human and robot were out of sync in their gestures — and that, the researchers found, was able to spark presence hallucinations.

The phenomenon occurred even in patients who did not experience the hallucinations in daily life — but it was more intense in those who did.

In separate studies of 30 additional patients and a group of healthy adults, Bernasconi’s team used MRI scans to see how brain activity patterns were related to presence hallucinations.

“Hopefully,” Beck said, “this will allow more investigation to better understand these hallucinations, and maybe lead to new therapies.”

Hallucinations, he noted, can portend more severe psychosis symptoms, including delusions — where people believe things that are untrue.

So it’s important that the “stigma” around hallucinations be lifted, Beck said, and patients and doctors talk about them.

The Parkinson’s Foundation has more on psychosis symptoms.