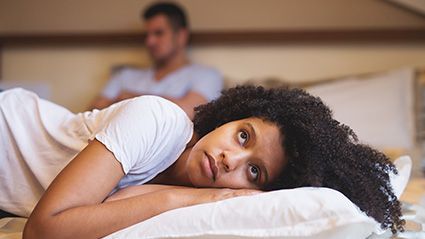 MONDAY, Oct. 3, 2022 (HealthDay News) — Young women who have survived cancer are at risk of having sexual problems, such as loss of libido and discomfort, a new study finds.

The quality of the survivor’s sex life is also influenced by the type of cancer she experienced and the intensity of the treatment, researchers found.

“This is one of the largest population-based studies of sexual function ever conducted in young women following cancer,” said lead author Lena Wettergren, a professor in care sciences at Uppsala University in Sweden.

The study, published Sept. 30 in the journal Acta Oncologica, involved Swedish researchers surveying 694 women ages 18 to 39 about a year and a half after cancer diagnosis. The women had been diagnosed between January 2016 and August 2017 and were identified through national health registries.

About half had breast cancer and the others had survived gynecological cancer, brain tumors or lymphoma. About 53% had treatment that was rated “very” or “most” in intensity or how extensive it was.

The women were asked about their sex lives in the past month in eight topic areas, which were satisfaction, interest, discomfort, pain while engaging in sexual activity and ability to have an orgasm. The patients were also asked reasons for not having sex with a partner and questions about body image and emotional distress.

The study authors compared their answers with those of a random sample of 493 women ages 19 to 40 who had not had cancer.

The research team found that women who had survived cancer were equally sexually active as those without the disease, about 83% compared to 87%, but a significantly higher proportion experienced difficulties with intimacy.

About 45% reported lack of interest in sex, with 34% of people reporting problems achieving orgasm and 22% reporting issues with satisfaction with sex life.

By comparison, women without a cancer diagnosis were 32%, 28% and 19% likely to report these issues, respectively.

“Our results show two out of three women experienced sexual dysfunction and the problems are related to their cancer treatment and emotional distress,” Wettergren said in a journal news release.

“These findings underscore the need to routinely assess sexual health in clinical care and follow-up,” she added. “We recommend development of specific interventions directed to women in addition to offering counseling and other aids.”

About 63% of women with a cancer history reported at least one sexual issue, which could include complaints such as vulvar discomfort. Others reported vaginal dryness.

Older women and those with breast or gynecological cancer were at higher risk of sex-related problems, the authors found. That was true of patients who went through high-dose radiation and chemotherapy.

Feeling unattractive was another key factor linked to lack of sexual activity with a partner. Emotional distress and a distorted perception of their bodies following cancer treatment were associated with greater sexual dysfunction, the study found.

More than a half million women are diagnosed with cancer in young adulthood each year, according to the study.

The researchers, who also included those from the Karolinska Institute in Sweden, urged health care providers to offer sexual well-being support such as hormone replacement therapy (HRT), vaginal moisturizers and psychological counseling.

The American Cancer Society has more on cancer in young adults.