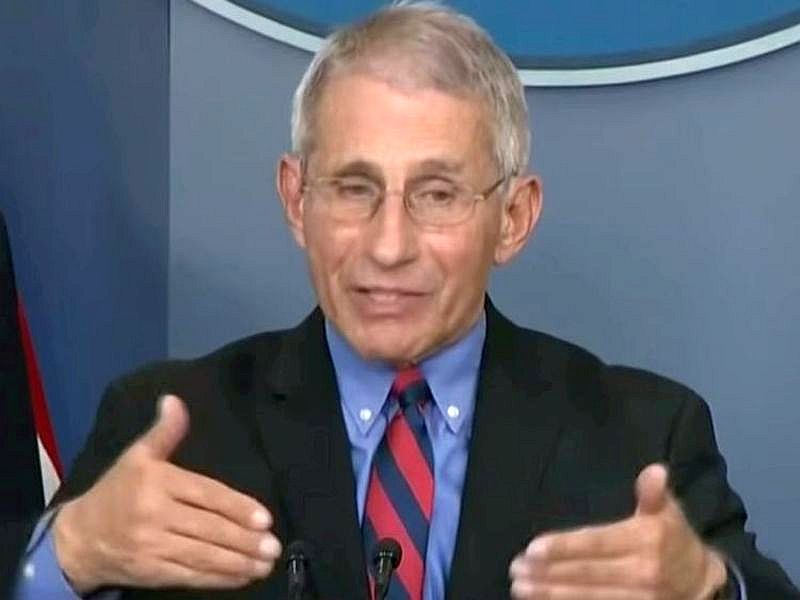 “I doubt that the federal government will be the main mover of a vaccine passport concept,” Dr. Anthony Fauci said during a Politico Dispatch podcast.

The idea of vaccine passports — proof that an individual is fully vaccinated against COVID-19 — has already become controversial, as local governments and businesses consider whether to mandate them, CBS News reported. They’ve also become a partisan issue, with Republicans across the country saying the idea is government overreach and an invasion of privacy.

Some businesses, including airlines, already require proof of a negative COVID test for customers. Meanwhile, Israel introduced an app-based vaccine passport in February, and the European Union is planning to introduce them over the summer, CBS News said.

During his Monday interview, Fauci said he believes “individual entities,” including theaters and colleges, will be the ones to make the call on passports.

“You could foresee how an independent entity might say, ‘Well, we can’t be dealing with you unless we know you’re vaccinated,'” he said. “But it’s not going to be mandated from the federal government.”

Despite the recent contamination of 15 million doses of Johnson & Johnson’s coronavirus vaccine at a Baltimore plant, the Biden administration on Sunday reassured Americans that there will still be enough doses to vaccinate every American adult by the end of May.

Johnson & Johnson will take over responsibility for manufacturing at the plant, U.S. health officials announced late Saturday. The company developed one of the two coronavirus vaccines that were being made at the Baltimore facility where the cross-contamination occurred.

At the same time, federal officials worked over the weekend to find another U.S. site where the other vaccine produced at the facility — developed by AstraZeneca — could be manufactured and have already identified potential locations, the Washington Post reported.

Last week, it was reported that a large batch of Johnson & Johnson’s vaccine had spoiled at the Baltimore plant after being contaminated with ingredients for the AstraZeneca vaccine.

The error was caught, and no contaminated vaccine left the plant, according to the companies involved. No doses had shipped yet because the plant has not yet been certified for emergency use by the U.S. Food and Drug Administration, the Post reported.

No matter what happens with the Baltimore plant or the AstraZeneca vaccine, which is not yet authorized for U.S. use, “there is enough vaccine for all adult Americans who want it by May 31,” a senior administration official told the Post on the condition of anonymity.

Federal rules specify that no more than one “live vector” vaccine should be made in the same plant, but the official told the Post it had been ambiguous whether the rule applies to the type of vaccines developed by Johnson & Johnson and by AstraZeneca.

That official, and two other administration officials who also spoke on the condition of anonymity, told the newspaper that the U.S. Department of Health and Human Services chose to keep the manufacture of the Johnson & Johnson vaccine at the Baltimore plant because those shots have already been approved for emergency use in the United States.

AstraZeneca said in a statement that it is working with the federal government “to support agreed-upon plans for the development, production and full delivery of the vaccine,” the Post reported. The company did not say how much its departure from the Baltimore plant could set back its manufacturing timeline in the United States.

AstraZeneca has already been beset by problems with its clinical trials, controversy over reporting of its data, and concerns in Europe about blood clots as a rare side effect.

In a push to overcome vaccine hesitancy, the Biden administration has launched a public outreach effort that will focus on communities that have been hit hardest by the pandemic.

Called the “We Can Do This” campaign, the project features television and social media ads and creates a “community corps” of public health, athletic, faith and other groups to spread the word about the safety and efficacy of the country’s three approved vaccines, the Associated Press reported.

President Joe Biden encouraged more than 1,000 faith leaders last Thursday to continue their efforts to promote vaccinations in their communities. “They’re going to listen to your words more than they are to me as president of the United States,” Biden said.

Meanwhile, Vice President Kamala Harris and U.S. Surgeon General Vivek Murthy held a virtual meeting with over 275 inaugural members of the community corps to kick off the campaign, the AP reported.

“You are the people that folks on the ground know and rely on and have a history with,” Harris said. “And when people are then making the decision to get vaccinated, they’re going to look to you.”

The focus on trusted community leaders came after internal and public surveys showed those skeptical of the vaccines are most likely to be influenced by local, community and medical encouragement to get vaccinated, rather than messages from politicians, the AP said.

As of Tuesday, nearly 4 in 10 American adults have received at least one COVID-19 shot and almost one-fifth have gotten their second shot, CDC statistics show.